“We will look back at the collective actions of the women who stood for radical democratic change over a century ago, especially those that planted trees, whilst we herald and walk into the second week of rebel actions in parallel with XR Earth Protectors in the City’s financial district.”

On October 14th 2019 we invited people to join us on a performative mile-long walk in London timed to coincide with the October International Extinction Rebellion. Invitations went out through Walking Forest networks as well as directly through Extinction Rebellion circles.

The start point of the walk was 4 Clements Inn, now the London School of Economics but back in 1906 the London Headquarters of the Women’s Political and Social Union Office (WSPU) where 1000s of suffragettes and suffragists based their actions and planning during the Votes for Women campaign. Lucy welcomed participants, extending gratitude across the arc of time to these historic campaigners and their collective creative resistance that often resulted in arrest and imprisonment. Rose Lamartine Yates, was one of those who served a sentence in Holloway Prison and we explained Rose’s important part in the Walking Forest story. Rose planted the last standing suffragette tree from the Batheaston Arboretum whose seeds we are saving to gift and propagate to plant in honour of women activists.

Before moving off Ruth read out aloud a quote from Suffragette organiser Emmeline Pethick-Lawrence:

‘this Movement absolutely absorbs me and gives me all I need.… Nothing can ever be so worthwhile as to fight for the freeing of women from the age-long bondage in which they have lived’.

Ruth herself had been part of the XR action taking place outside the Bank of England that morning and had been banned from entering the city of London by the police for the rest of the day.

As we walked participants were invited to talk in pairs about connections to activism that felt important to them either personal or historical.

We stopped outside the Royal Courts of Justice, the site of a number of suffragette trials, and spoke about the law; breaking it and making it, and highlighted another inspiration for Walking Forest the Stop Ecocide Campaign advocating to make it an international crime to destroy the earth and its ecosystems, started by the lawyer, the Late Polly Higgins who died on Easter Sunday in 2019:

“The rules of our world are laws, and they can be changed. Laws can restrict or they can enable. What matters is what they serve. Many of the laws in our world serve property – they are based on ownership. But imagine a law that has a higher moral authority… a law that puts people and planet first. Imagine a law that starts from first do no harm, that stops this dangerous game and takes us to a place of safety….” – Polly Higgins, 2015

At this moment, Anne-Marie shared the fact that this same morning her step-daughterwas facing trial at Bank, in the City of London Magistrates Court having been arrested as an Earth defender as part of the Extinction Rebellion April Rebellion.

We stopped at the official boundary of the City of London at Temple Bar, and gathered around the Dragon monument in the middle of the road. At that same moment Extinction Rebellion were in occupation outside the Bank of England (Bank), in the heart of the City, calling on the government to tell the truth about the climate and ecological emergency, reduce carbon emissions by net zero in by 2025 and hold a Citizens’ Assembly to guide the transition. With the backdrop of this event we told the story in more detail of the Suffragette Arboretum and the trees planted by suffragettes, some of the trees planted in respite once they had come out of prison. We invited people to hold pine cones harvested from the one remaining tree and then on the sound of a horn we processed in silence into the city, led by Ruth, crossing both the physical threshold and that of time past, present and future. 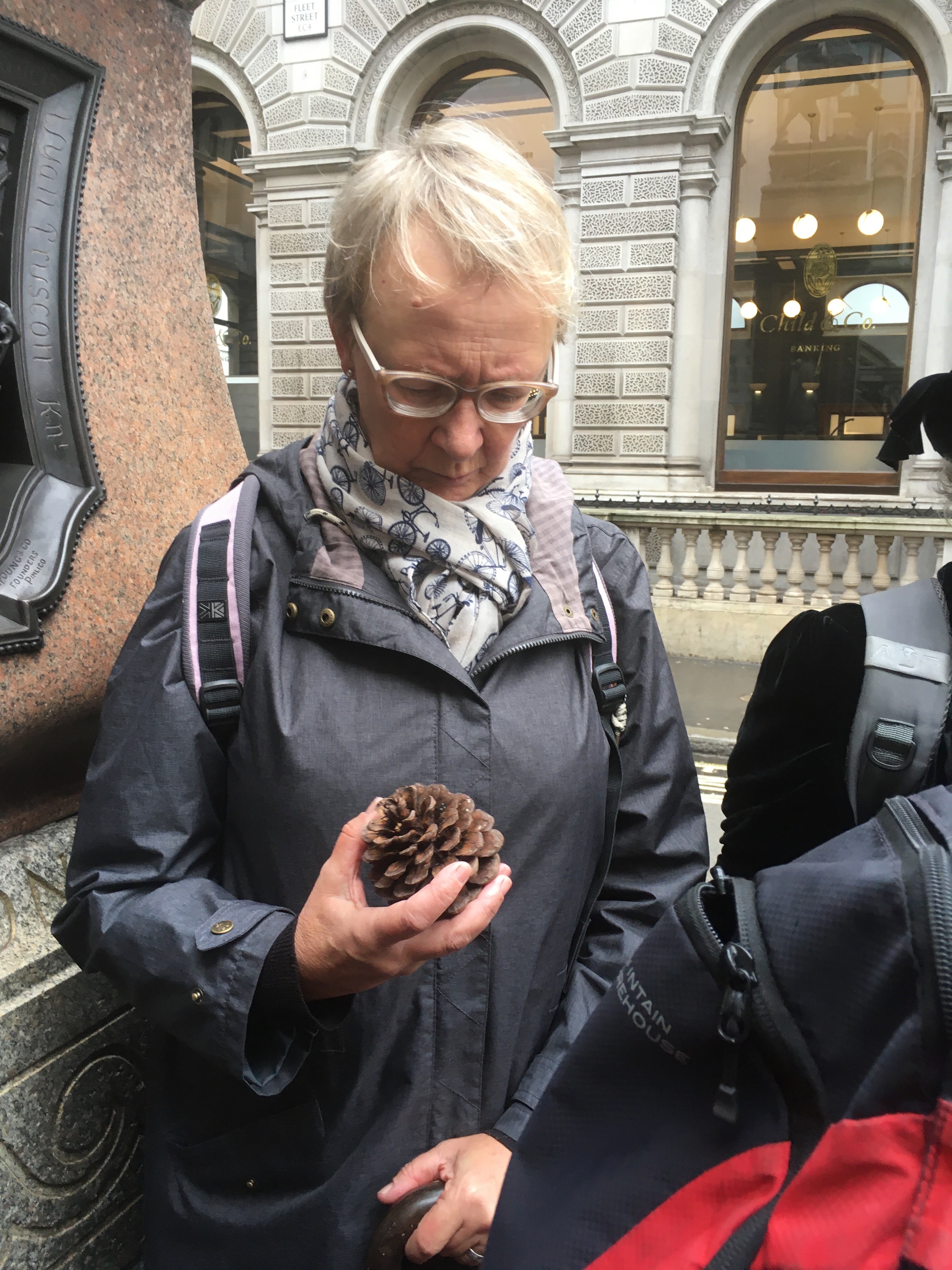 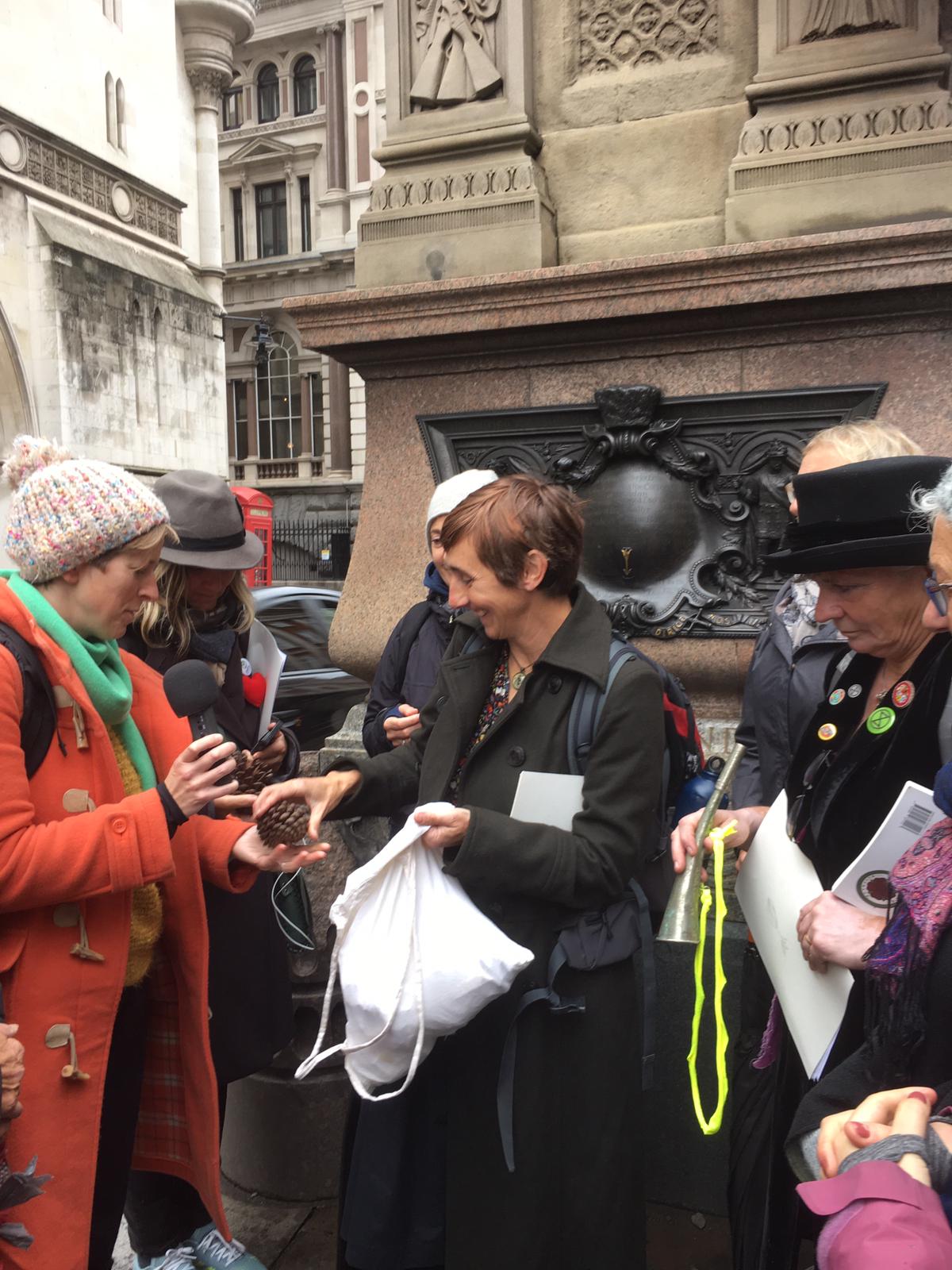 The Walk took us into Old Seacole Lane off Ludgate Hill to visit an isolated and sick looking tree growing amidst the tall corporate buildings and planted in the paving slabs. Listening to a soundscape composed by Sarah Nicholls we invited people to spend time on their own around the tree, reflecting on ‘What keeps us going?’ and ‘How do we manage in the light of the pain for the world we may feel?’

Our next stop was St Paul’s Cathedral and the site of London’s Occupy protest in 2011-12, an international movement that expressed opposition to social and economic inequality, opening up public space for other global campaigns to follow. We spoke about power, system change and how often small tipping points can catalyse change standing on the shoulders of decades of campaigning, a bit like the power of a seed that holds so much potency and potential. Making this conceptual link, we introduced and passed around for everybody to hold a tiny seed from Rose’s Suffragette tree and we shared the story about the Walking Forest’s visit to the COP 24 International Climate talks in Poland in 2018 where seeds were gifted to international changemakers. As we walked sirens wailed as tens of police vans headed into the city to the site of the protests that we were walking towards. 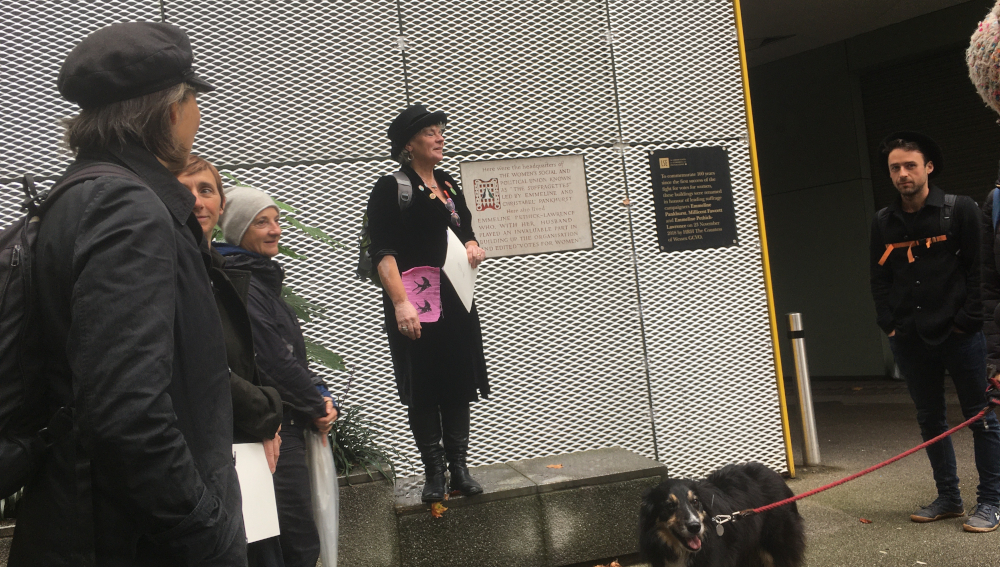 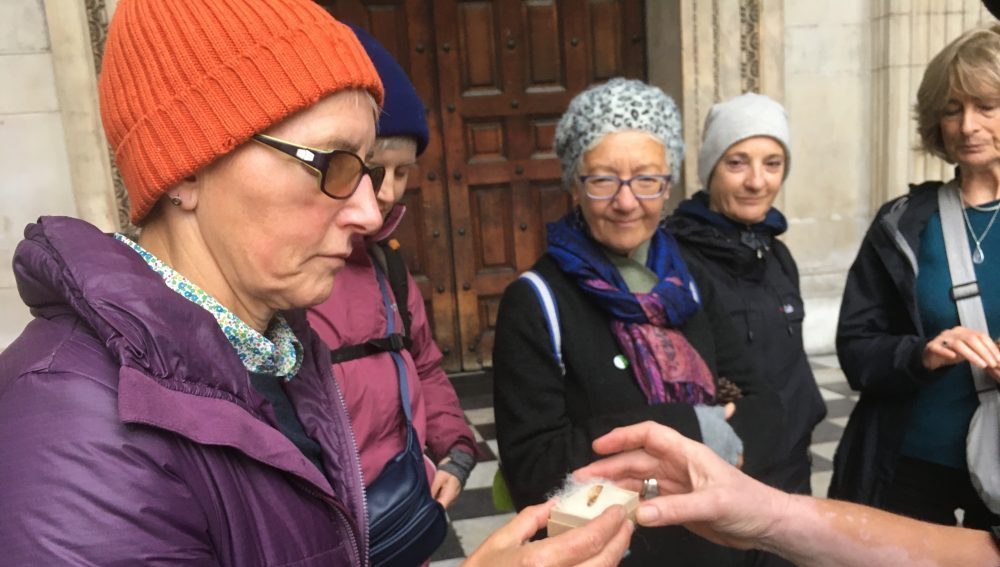 As we began our final leg of the walk we stopped opposite St Paul’s Cathedral in a small square on the corner of Cheapside and spoke words from an interview with Suzanne Simard, a Canadian professor of forest ecology whose research has demonstrated that trees communicate with each other through an invisible web of underground connections  and we invited people to close their eyes and imagine all the activity beneath the forest floor, beneath this pavement, and then to use chalk to draw this on the paving stones. At the same time we shared an image of Suffragettes drawing in chalk on paving stones in London as part of their creative campaigning. 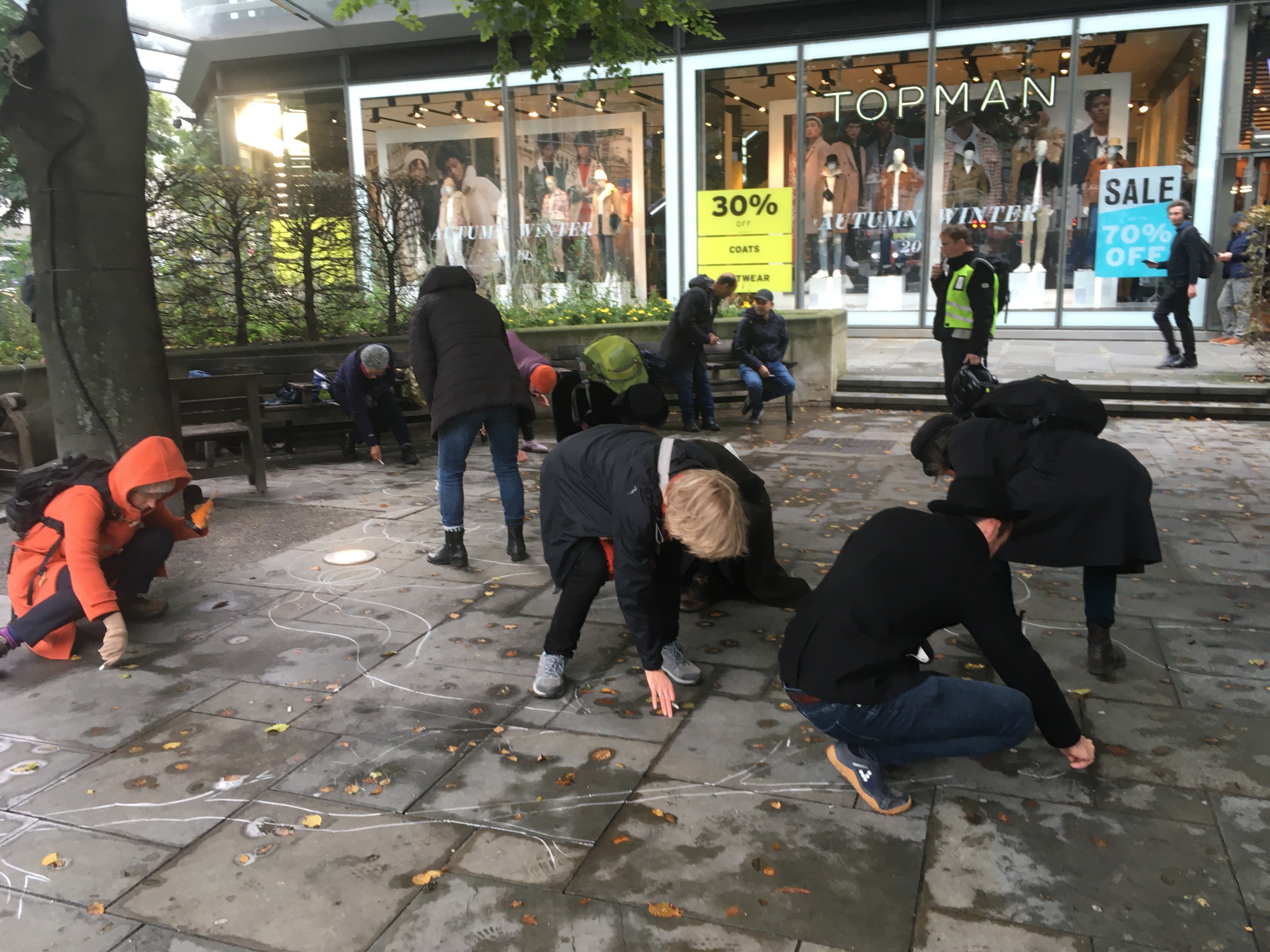 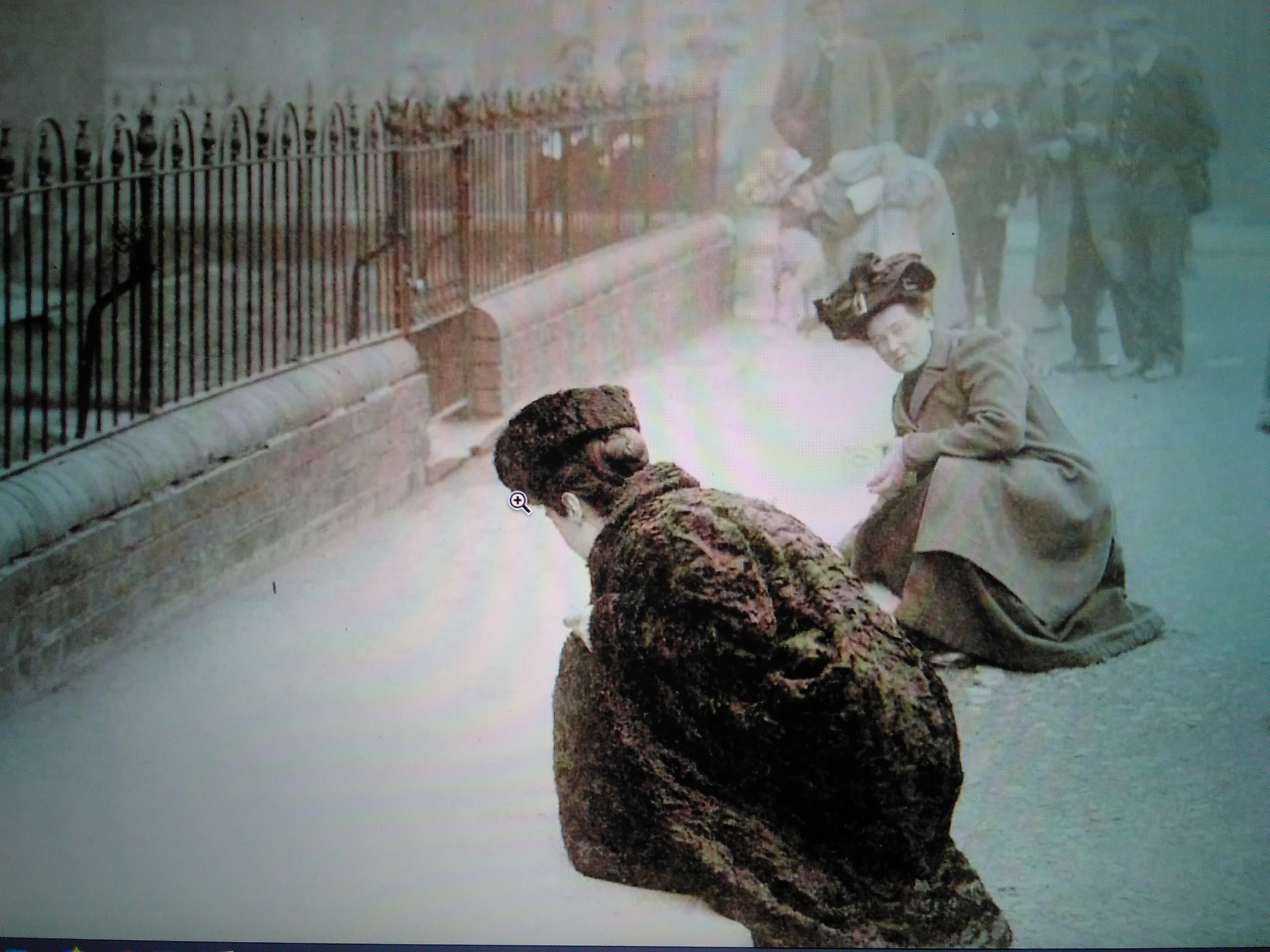 Our final destination was a magnificent survivor tree, the London Cheapside Plane Tree. It was purchased for sixpence over 250 years ago and is still standing on the corner of Wood Street and Cheapside in the City of London, sandwiched between tower blocks and the two storey building that has remained there because of the protection afforded by the tree. Here we drew strength and perspective from the resilience of this tree that has witnessed and survived fire, bombs and immense change over more than two centuries and forms part of a living relationship with city dwellers as it takes in carbon dioxide and releases oxygen and provides habitat and shade. 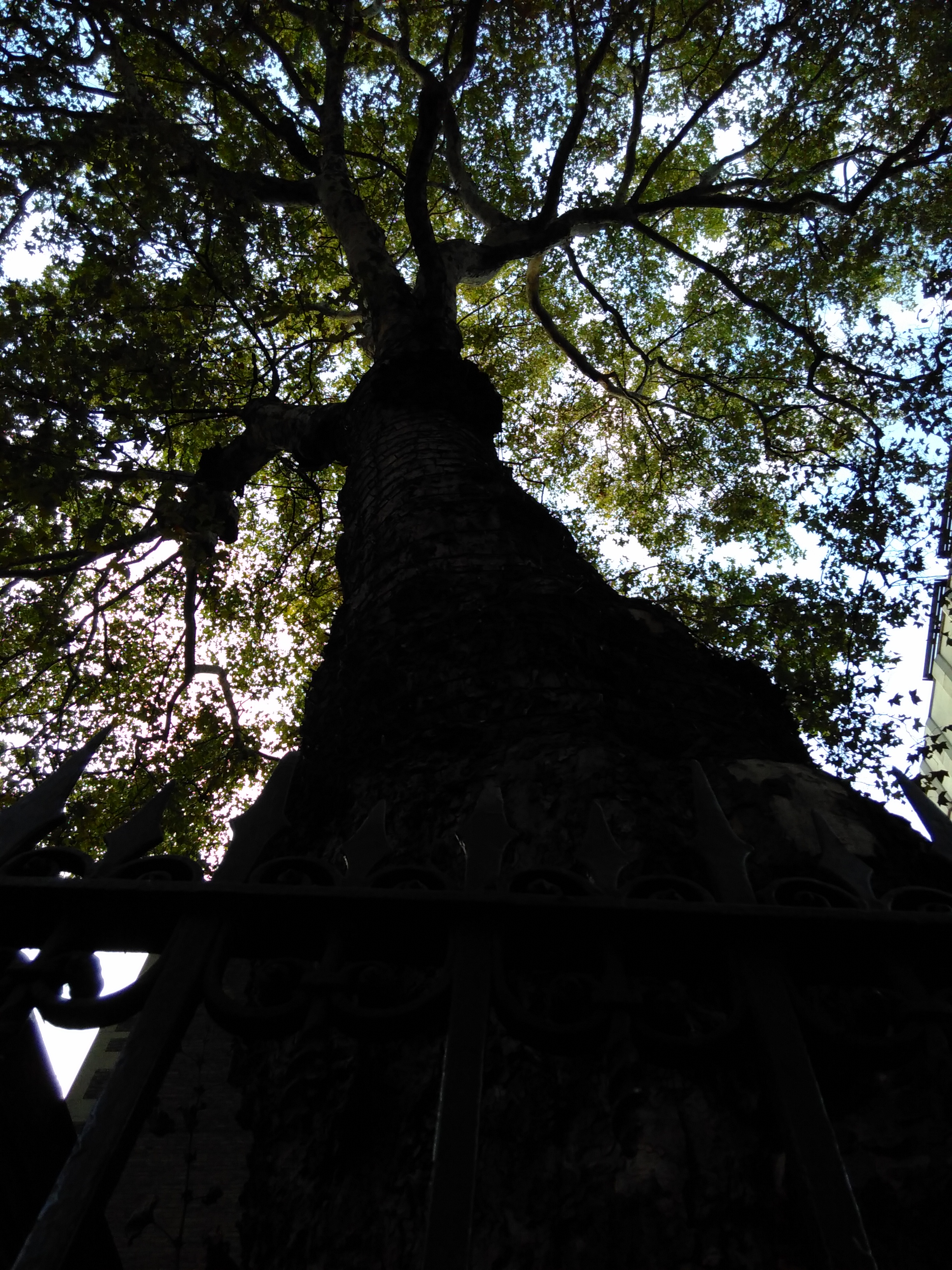 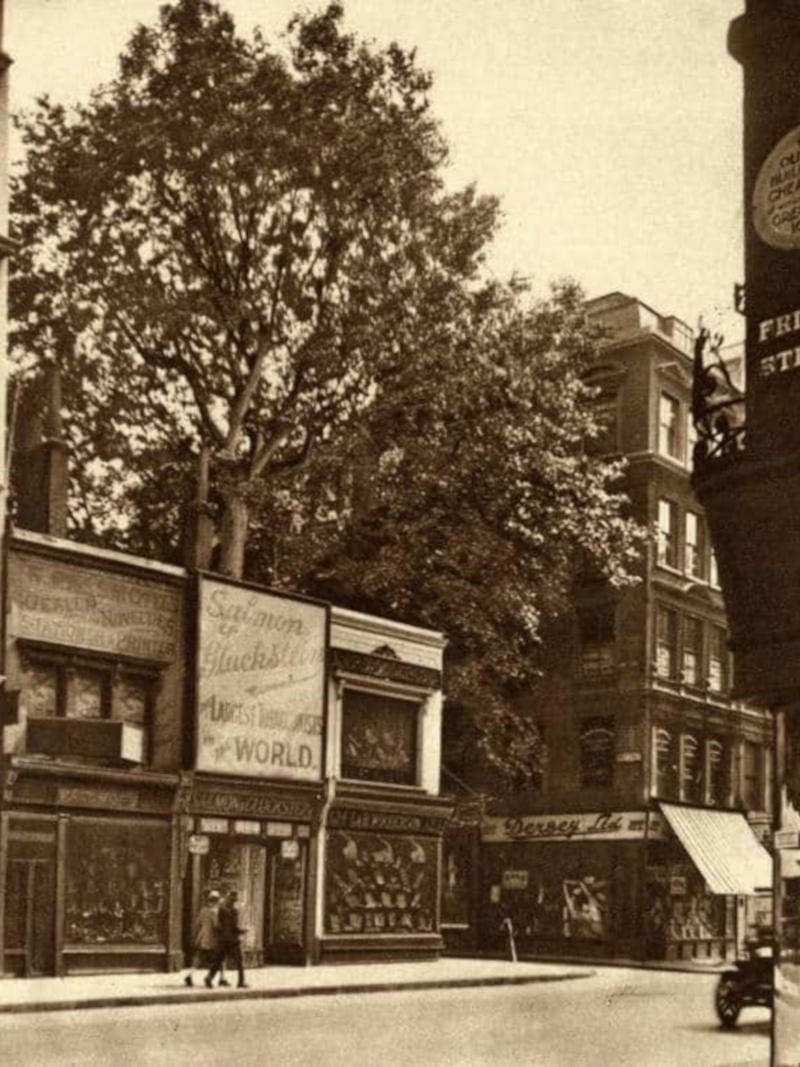 Finally we shared an image of the two Suffragette Tree Radicle sisters Shelley has successfully propagated (a radicle being the first part of a seedling to emerge from the seed during the process of germination). We asked people to reflect on the question ‘what can we learn from this tree and the new sister radicles?’ A minute or so down the road, a huge crowd had gathered at Bank station, occupying the street as part of the Extinction Rebellion campaign. Later that evening the Metropolitan police placed a Section 14 order on all further protests in London. (An order later proved by judicial review to be illegal.)

Before going our separate ways people were invited to write a message to Jasmine facing trial at the City of London Magistrates Court and several went to Court to offer her our support.

Sitting in court listening to this young woman’s testimony, courageously standing in the dock to give an account of her decision to stand up to protect a living Earth, embrace of history that had circled through every story of the day past, present and future emboldened us all. She herself, holding a seed of the Suffragette tree in her trouser pocket.